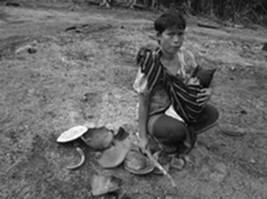 Village burned earlier by Burma Army.
The Burma Army is attacking this area again and this lady and baby have run and are in hiding again.

FBR relief teams in the area reported that some of the people displaced as a result of these attacks are suffering from malaria, diarrhea and dysentery. Relief teams in the northwestern part of Muthraw District have received a new supply of medicine and are now with the over 2,500 people in hiding in this area.

Some of the Burma Army LIB 362 and 363 soldiers have been wounded in clashes with the Karen resistance (KNU/KNLA). These battalions have not moved from the Ger Baw Kee Village area.

One column left from Muthey and went to Mu Kee area. The other columns went to Thaw Mee Der Village area. The Karen population is in hiding. The Burma Army at Maladaw re-supplied their food and more soldiers arrived at the camp. They forced villagers to let the soldiers use their bullock cart. The villagers were forced to build a fence around the army camp. The Burma Army told the villagers that they have plans to build a clinic for the population in the area. Burma Army troops are patrolling in Maladaw area.

On 2 June, 2006, it was reported by escaped porters as well as the Karen resistance that the Burma Army has plans to start a major operation in Nyaunglebin, Toungoo, and Muthraw Districts that is larger in scale than this current offensive. At present the Burma Army is moving at least two divisions closer to those areas.