INTRODUCTION:
This update covers the current situation in Toungoo District, where over 5,000 people are displaced and in hiding. This brings the total number of displaced people to over 16,000 in Western, Northern and Northwestern Karen State. Note: The population of people displaced from their home fluctuates depending on Burma Army attacks and proximity of follow on patrols. For example, in Mon Township, from the end of March through the first week of May there were over 5,000 people displaced. Due to the slow down of Burma Army attacks and the decrease of patrols in some areas, about 1,000 people in this township have been able to return to their homes. At any time they may have to flee again. 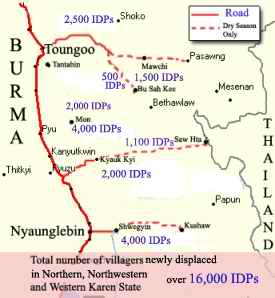 The breakdown of the current situation of displaced people in northern, northwestern and western Karen state is as follows:

Note: Including people who have fled to the Salween River, the total number of IDPs is over 17,000.

Burma Army Division 66 is conducting battalion size patrols of the entire Toungoo District. There are now well over 5,000 in hiding in Toungoo District because of these attacks. Supporting Div 66 in these attacks is MOC 16, attacking villagers and IDPs in southern Toungoo District along the Toungoo/Nyaunglebin border. Tactical Operations Command (TOC) 661 of Division 66 is operating against civilians north of the car road. TOC 663 is operating between the Toungoo-Mawchi Road and the Kler Lah-Bu Sah Kee Road as well as Southwest of the Kler Lah-Bu Sah Kee Road to the Yaw Lo Klo River. TOC 2 of MOC 16 is conducting its attacks in the area of the Yaw Lo Klo River south to the Nyaunglebin District border. Note: TOC 1 of MOC 16 is operating from the Nyaunglebin/Toungoo border south down into Mon Township.

The people displaced in Toungoo District, by area, are as follows:

Due to the organization of the KNU and the preparation of the villagers themselves, they have enough rice to sustain themselves for two months. It is the aim of the people here to try to stay in their land and not go to Thailand as refugees. However, if the attacks continue and not enough rice, medicine and shelter is provided for these people, then it is possible there will be more people arriving in Thailand as refugees.

The priority of needs for these people according to the leaders and the people themselves are security, rice, shelter and medicine. Due to the activities of the Burma Army and closing of trade routes, it takes at least one month to acquire rice once you have the money.

The current rice needs are a minimum of 6,000 tins of rice. There are three tins in one 50 kilo sack of rice. Between one and one and a half tins of rice feeds one person for one month. Note: The number needing rice is over 5,000 as many of the people who are still in their villages are under immediate threat by the Burma Army and may have to leave as well In the Karen State, a tin of rice costs 5,000 Kyat, equivalent roughly to 170 Baht.