Total number of IDPs now in Karen State is over 13,000 people 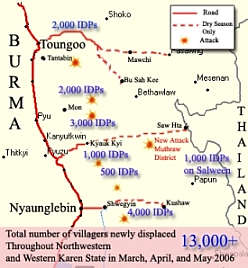 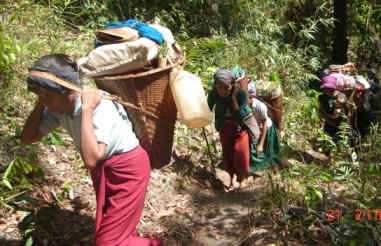 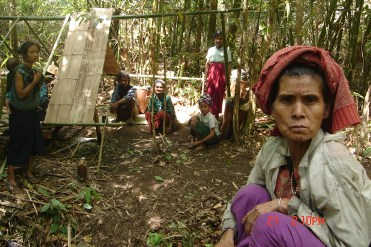 In Mon Township, Burma Army infantry battalions (IB) 241 and 242 left the Burma Army camp of Muthey on Monday, May 1st2006, and began to follow the same route earlier used by two waves of Burma Army troops in late March and late April, as they attacked villagers, burned homes, and destroyed rice and other belongings.  Upon reaching the village of Naw Law Teh Bwa, a small group KNLA resistance soldiers slowed their progress.  The Burma Army troops have not moved on, but continue to patrol the immediate area.  It is believed that these troops are making their way to the villages of Tee Ko and Nwachi, both of which have already been abandoned as villagers flee these attacks.  There are now over 4,500 villagers (IDPs) in Mon Township alone, who have fled their homes as Burma Army troops continue to conduct new attacks throughout the area.

-On 27 April, LIB 599 under Maj. Yan Naung ordered officer Than Tung and Corporal Yeh Ming from Kyun Ping Seik army camp to go to the following villagers and capture the following people:

-On 25 April, the SPDC forced Ler Sah Kwee village to move to Ywa Myo.  Also, LIB 387 captured around 300 villagers who live in villages along the Shwegyin River up to the village of Ler Sah Kwee in order to use them as porters.

IB 223 and IB 56 have begun new operations in the Htee Bla area of Nyaunglebin District.

-There is currently one Burma Army Tactical Operations Command (over 300 men) based at Wah Ko Law Teh.

-People from the Shwegyin area, who are farming in the Hsee Moo Hta, are being forced to give 2,000 kyat per month to the SPDC.  There are also now 10 checkpoints along the river, and 7 on the land between Shwegyin and Hsee Moo Hta, and these same villagers must pay 200 kyat at every checkpoint they pass in order to be allowed through.

-The Burma Army is now building a rice warehouse that will be big enough to store rice for 10,000 men at Hto Day.  Hto Day is close to Kyauk Pyat.  Villagers have been forced to work on this project, and any villager that does not come to help must hire someone to take their place.  This costs them at least 2,500 kyat.

-The Burma Army has warned villagers that anybody known to have contact with the Karen National Union (KNU) will be executed the day they discover this information.

-The Olympic company, a Korean and Chinese cooperative, are building a dam on the Shwegyin river.  They have already completed laying the dam foundations along the banks of the river, but have not yet begun dam construction across the river.  Civilian fields and plantations along the river have been destroyed without compensation during the construction.  No villagers are allowed near the site of dam construction.  The Burma Army camp located at the site is armed with one large gun.  The Burma Army has warned civilians that if the KNU attempts to disrupt the construction of the Dam, the entire population of Karen villagers in the surrounding area will be cleared out.  Villagers in the area have not been able to work on their farms.

The number of new IDPs now in hiding in Nyaunglebin District is over 10,000

On April 28, 2006 at 3:15 pm, soldiers from LIB 801 shot at villagers from Kaw Thay Der, hitting one 35 year old man in the arm.  Saw Mya Lers arm was broken when he was shot by the Burma Army as he was working in his betel nut grove near his village.  After shooting at them, the Burma Army troops entered the village and told villagers that anyone found outside the village would be considered an enemy and shot.

LIB 801 is under the command of Battalion Commander Aung Kyaw Oo, and second in command Maj. Nay Myo Aung.  It is within Burma Army Division 66.