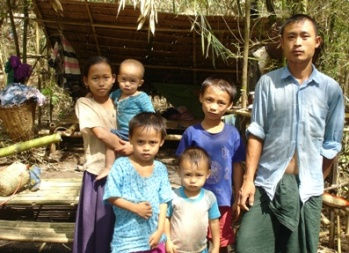 This family, from Mon Township is standing in front of its hiding place in the jungle.

This entire family is living in the small hut behind them. April 21, 2006 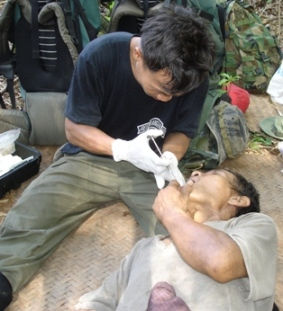 This is a relief team medic providing dental care to IDPs at their hiding place in Mon Township, western Karen State. Apr. 21, 2006. 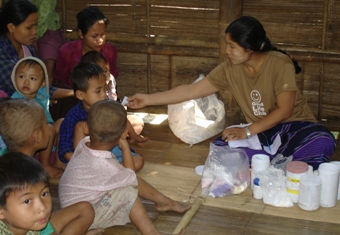 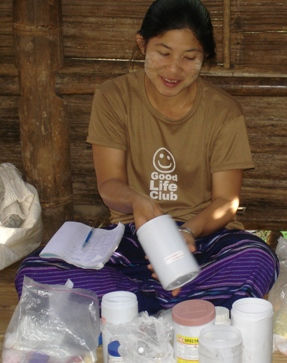 Burma Army forces villagers to leave their homes and move to relocation
sites. Most villagers flee rather than comply. The Burma Army is now
conducting search and destroy missions against these people and their hiding
places. These same troops have entered the abandoned villages and looted all
the belongings. This is occurring now in Toungoo District, North Western
Karen State. April 24, 2006.

“The SPDC uses force to clear areas they would like to occupy, driving
civilian villagers from their land and fields. It is very difficult for them
to survive. Therefore, all the villagers have a very difficult time. All of
their possessions have been taken or destroyed by the SPDC; the SPDC now
come and build their camps over their land. The IDP cannot return. Their
life in hiding sites is so difficult that many are now trying to cross the
border to the refugee camps in Thailand. Others, despite their difficulties,
choose to stay in the jungle and not leave their country. So we need to help
them. We fear for the future of the IDP in Taungoo district; however we
entrust our life to God and we struggle to live.” – quote from an ethnic
Karen relief team leader

The Burma Army has extended its operations in Western and Northern Karen
State resulting on over 9,000 people having to flee their homes. *
4,000 people are displaced in Mon Township, 2,000 in Shwey Gyin and Kyauk
Kyi townships*, over 2,000 in Toungoo District, plus 1,000 more who have
already fled all the way to the Salween River (earlier in March and the
first week of April).  Over 8,000 now in hiding, and over 1,100 already gone
to the border.

The Burma Army gave orders that they would shoot on sight any villager they
found in their old villages after the April 25th deadline to relocate.

Major Aung Yan Tun, commander of LIB 168 called a meeting for the villagers
from Ye Lo, Ta Pa Kee, and Plo Baw Der.  He told each family to send one
family member to Play Htsa Lo/They Pu.  He told these villagers that by the
25th they had to move to Play Htsa Lo.  If they didn’t move and they were
seen, they would be killed.

Earlier this week his battalion was involved in the following activities:

April 16: LIB 168, 522, which are both under the command of MOC 16, combined
and left Play Htsa Lo/They Pu camp.  On the afternoon of the 16th they
arrived at Plo Baw Der and spent the night there.  They stole property that
the villagers could not carry with them as they fled.  The following is a
partial list of those things and the villagers they were stolen from:

The next day they went to Ta Pa Kee and spent the next two nights there.
They stole belongings and ate animals.  Villagers from Ta Pa Kee had already
left the village to hide in the jungle after the Burma Army ordered them to
relocate their village by April 21st.  Villagers did not want to move to a
forced relocation site, so they gathered up all belongings they could not
carry and fled to the jungle.  Burma Army troops have also been searching in
the jungle for these hide sites.

On the 19th they went to Kwey Der and spent the night there.  On the 20th
they went to Po Mu Der and spent the night nearby.  On the 21st, instead of
going into the village, they turned and went to Hu Mu Der.  They are now in
Hu Mu Der, and they have destroyed homes and stolen belongings.  They have
also eaten animals in the village that villagers left behind when they fled.

Other villages that were told to relocate by the 21st are:

Villages that were ordered to relocate by the 25th

On 20 April, 2006 Burma Army LIB 366 from Plako army camp, under the command
of Tun Tun Win, patrolled the area of Paw Mu Der village and shot two of the
villagers from that village.  Saw Hsa Rae Sae, 17, was shot and killed, and
his friend, Saw Kyay Nu Wah, 18, was shot and wounded in his right leg. On
15 April, another Karen farmer , Saw Wey Htoo age 31, was shot dead ion his
fields near Plako, Muthraw, by a Burma Army patrol.  Villagers all fled the
village, fearing a direct attack. The Burma Army troops never entered the
village and returned to their camp the same day.  Villagers have now been
able to return, and have already performed the funeral service for Hsa Rae
Sae.