(Report From FBR Teams Now in the Field) 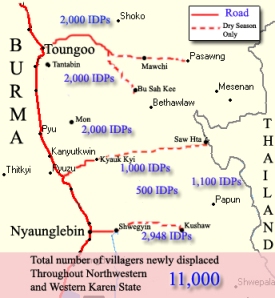 11,000 people displaced as Burma Army expands its operations:
There are now over 11,000 Internally Displaced People (IDPs), who are in
hiding from or fleeing Burma Army attacks in Nyaunglebin and Toungoo
Districts, Karen State. These attacks started in February, intensified in
March and keep building up now in April. The major Burma Army units now
conducting these attacks are as follows:

1) Military Operations Command #16 is operating in Mon Township, Nyaunglebin
District from two camps-
One- Muthey Camp in the southeast part of Mon township (on the Kyauk Kyi-
Hsaw Hta Road. Hsaw Hta is on Salween River. ). And two, operating out of Maladaw
Camp. Maladaw is a new camp established in 2004 in North Western Mon
Township.
MOC 16: A new force of over 850 Burma Army troops just started a new
operation yesterday (23 April), and are moving south into IDP areas from
the
Muthey Burma Army Camp. They are divided into three columns: One column of
600 men is now heading South West, the second column of 250 men are moving
South and a third column (strength and direction unknown at this time) are
part of this force as well.
Three battalions of  MOC 16 are also operating up into southern Toungoo
District this week, shelling villages and chasing IDPS This is also the area
of new forced relocations. On 23 April a new group of 100  Burma Army
soldiers arrived at Maladaw. They could not speak Burmese or Karen and some
people in the area speculated that they are Wa, Chin or Naga troops working
under the Burma Army.
Total: 4,000+ IDPS in Mon Township, Nyaunglebin District.

2) Military Operations Command # 21 is operating in Ler Doh (Kyauk Kyi) and
Hsaw Hti (Shweygyin) Townships in central and southern Nyaunglebin
District. The greatest activity is in the far south of  Hsaw Hti (Shweygyin)
township-operations occurring southeast of the town of Shweygyin- where
there are now over 2,948 newly displaced people as of 24 April 2006.
Including the over 1,400 people in hiding in Ler Doh and Northern Hsaw Hti
Townships, the total for these two townships is over 4,000 people.

3) Military Operations Command  #10 is operating out of Pwa Gwa and Ler Mu
Plaw Camps into Muthraw District. No new IDPS.

4) Division 66 (regular garrison force) is conducting sustained operations
against civilians in the area of Thanduang and Baw Ga Li Gyi. On 23 March
they forcibly relocated the village of Tha Yae Yu and then burned the
village down. Toungoo District: 2,000+ IDPS. * In addition to these 2,000
people in hiding, over 1,100 people have already fled to the Salween River
from Toungoo District. Over 3,100 IDPs.