New Group of 150 IDPs Attempting to Flee to Salween River 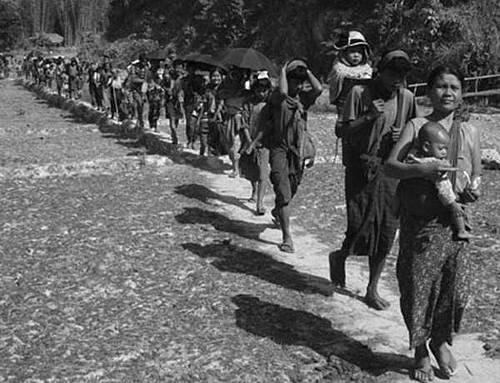 A new group of 150 people just managed to cross a Burma Army controlled road and arrived in a village in Northern Karen State after 2 weeks on the run.

These people fled murder, landmines, and the destruction of their villages by the Burma Army. They are the latest of over 1,000 people who are attempting to flee to the Salween River.

There are more than 5,000 other newly displaced people still hiding and the Burma Army is still conducting operations against civilians in this area.

Relief team note: We are on our way to help some of the over 5,000 new IDPs and to help the relief teams already in the area. Almost everyday we are passed by families fleeing. 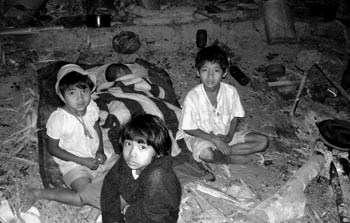 Children with sick brother staying warm by the fire (FBR)

Last night (4 Apil), while we were stopped in a village a new group of 150 displaced people walked in at dusk. They were tired, on edge and many babies were crying. They had just crossed a Burma Army controlled road and were now at the end of their food supply. They had been walking for 2 weeks as they tried to escape the Burma Army. It was heart-rending to hear the children cry and see the faces of these people, some of whom looked bewildered to be here. I thought of my own children and it made me feel pain. I watched as one group detached from the main group and headed up a nearby hill evidently thinking that this was were they needed to go. When they were told that the place prepared for them was on another hill, I could see their disappointment. Some seemed to be near their breaking point and the children sensing this began to cry. But, in less than 5 minutes they had arrived on top of the hill on which they were to stay and the place prepared for them. They put down their loads and began to gather firewood. We are trying to help in some small way and are impressed by the KNUs (Pro-democracy Karen resistance) ability to organize help and work with the local villages to give help on short notice. They moved out of their local office (bamboo huts) and let as many of the new arrivals who could fit, stay inside. The rest of the families are sleeping around fires in the jungle. Some of the team slept with the people to encourage them.

They told the team stories of murder and the blocking of all access to their farms and travel by the Burma Army. They told of landmines placed to terrorize them and block their way as well as patrols that hunted for them. They told of the destruction of their homes and that they found it impossible to stay. In spite of all this, many could still laugh and smile. Once finished eating, the children began to play and laugh and run around their new surroundings.

One retired teacher, Naw Nancy, smiled and said, Never mind, we have faith.yes, God is here. These are a gracious and resilient people who have been forced to flee but have not given up hope. They want to go back home. Thank you all for your standing with these people.