As a result of recent attacks by two Divisions of the Burma Army (see recent report), villager Saw Du Shwe stepped on a Burma Army land mine laid to terrorize the population, villagers property has been destroyed and there now a total of over 3,400 new Internally Displaced Persons (IDPs) in these areas. This is being relayed from a relief team in the field. There are now two Burma Army Divisions operating in these areas, an increase of one division over the usual amount of troops in this area.

As a result of resent attacks by the Burma Army, on 21 March 2006 at 6:00 p.m., villager Saw Du Shwe stepped on a land mine laid by the Burma Army near Day Baw Kee Village, Keh Der Village Tract, Nyunglebin District, western Karen State.

On 20 March 2006, the Burma Army attacked Ler Wah area with the same troops (MOC 10,LIB 362,363 and MOC 16 with two battalions) who were in Keh Der Village Tract. The strength of these troops is estimated to be 700-800 people, including porters. The troops are now staying in the Ler Wah area. 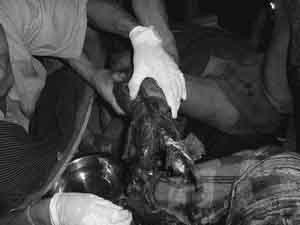 Saw Du Shwe being treated after stepping on Burma Army land mine on March 21, 2006. 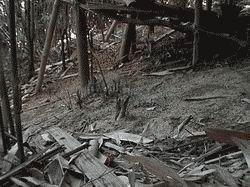 This is a result of the attacks recently reported in Nyaunglebin District, western Karen State.