New Anti-personnel Landmine are being used by the Burma Army against the civilian population. This report was sent from the field on Jan 18 2006 by a FBR team whilst on a relief mission in the Southern Karen and Northern Karen States. 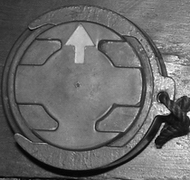 This land mine is an anti-personnel landmine now commonly used by the Burma Army against the Karen and Karenni people.

Landmine on the left is a copy of the US made M14 anti-personnel, pictured on the right

The bottom views of the copy on left and M14 on the right.

This copy is not of US manufacture and the country of manufacture is not known to the people here. They know that the Burma army has been using a large quantity of these land mines since 2004. In 2005 over 500 of these copies of the M 14 land mine were placed by the Burma Army in Southern Karenni State alone. This land mine is also being used against the Karen people in Muthraw and Toungoo Districts and it was one of these landmines that took the lower leg of a 75 year old man, Htoo La, in Hee Daw Kaw village, Toungoo District. *( His photo is below and please see www.freeburmarangers.org for that report). One of these landmines was also found at the entrance to the village church after the Burma Army departed. The second and third pictures show a comparison (top and bottom views) of the M14 and the copy currently being used by the Burma Army. The copy is not as well made as M14 and is reportedly not as reliable. The main superficial differences are a longer pointing arrow and the lack of manufacturing data on bottom the copy, different type of shipping plug, poor gluing and sealing and different placement of loopholes and the Arm/Safe modes. The copy is also much more difficult to arm. Both land mines were found by the Karenni after the Burma Army had placed them near their villages. After the Burma Army attacked and burned 25 houses in Gwe Ga Per village, Karenii State, on 23 December 2005, they also placed 7 of these landmines near the village.

Since January 2006 there has been an increase of the use of these M14 copies as the Burma Army in Southern Karenni State and Northern Karen State has begun to systematically place these mines on the main trails in the mountains of these areas. For example, the villagers in the area east of Baw Ga Le Gyi (Kler Lah), Toungoo District, Karen State were given the deadline of 16 January 2006, to vacate their out lying fields and were told that the Burma Army would be conducting a sweep in this area and then placing land mines throughout the area. The use of landmines is one of the weapons that the Burma Army uses in its attempts to control the ethnic population in this area.They cause the death and maiming of many people, and spread terror among the population. In spite of this villagers and IDPs do not give up and continue to try to survive and farm their land in the face of these attacks. Many have become proficient in the finding and removal of landmines and when someone does step on a mine the villagers band together to carry that person to a mobile clinic run by the pro-democracy ethnic resistance (KNU and KNPP). Often the persons’ lived is saved but the limb is lost.