We are now at the village of Hee Daw Kaw that the Burma Army attacked and burned on 28 November 2005. We are here to further document what happened (one FBR team was here soon after the attack and that report was sent last month). We are providing a small amount of medical assistance and relief (rice, blankets, Good Life Club packs, etc).

In the midst of destruction it is amazing to see the resilience of these people. This is a beautiful village and must have been much more beautiful before half of the houses were burned down. The teams are now with the people here and they seem very encouraged and positive. We are glad we can be here with them at this time. 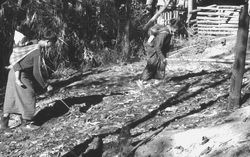 Yesterday we visited a 75 year old man who stepped on a landmine here 2 days after the Burma Army soldiers left his village. What a terrible thing to go through. It is bad enough to have your house burned down and your belongings stolen. To then suffer the agony of stepping on a landmine and losing your foot, simply because you desire to live in your own home, seems unbearable. The Burma Army laid three land mines in this village, one the old man stepped on, one was found in front of the church and one is still unaccounted for. The church itself is not burned down. The villagers believe that due to superstitions some Burma Army troops believe in, they are afraid to burn this church. However, this did not stop them from putting the land mine at the entrance of the church nor did it stop them from looting and then burning the peoples’ homes. 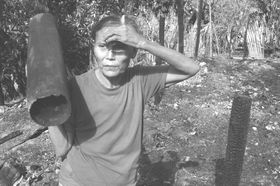 Two weeks ago, the Burma Army burned down a Karenni village (Gwe Ga Per), which is located two days walk north of here. Due to that attack and the patrols of the 6 battalions involved in the attack, over 1,200 Karenni people are now in hiding. A relief team is on the way there to help those people. 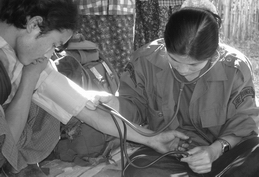 Last night we learned the Burma Army is planning to conduct another attack somewhere in this area in the next two weeks. We can not stop the attacks, but we can share what we have and be with them in the face of the attacks. Please pray for us and especially for all of the precious people here.

God bless you all,

Context of the Attacks. This report was sent out soon after the initial attack on Hee Daw Kaw village.