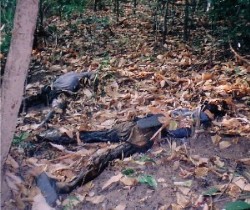 The remains of the two villagers captured
by the Burma Army 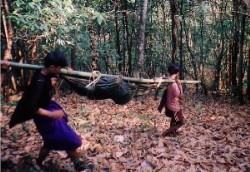 Bodies carried by villagers for burial
Two villagers from Toungoo District disappeared on December 26,2004. They were captured by Burma Army troops and not heard fromagain. The bodies of the villagers were found in May 2005 by villagersin the area of the Burma Army camp housing the troops who captured thevillagers.

The disappearance of these villagers was reported in February 2005 by an FBR relief team in this report from 14 February 2005.