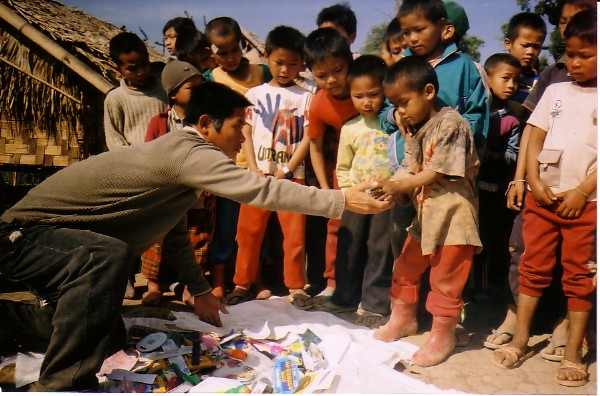 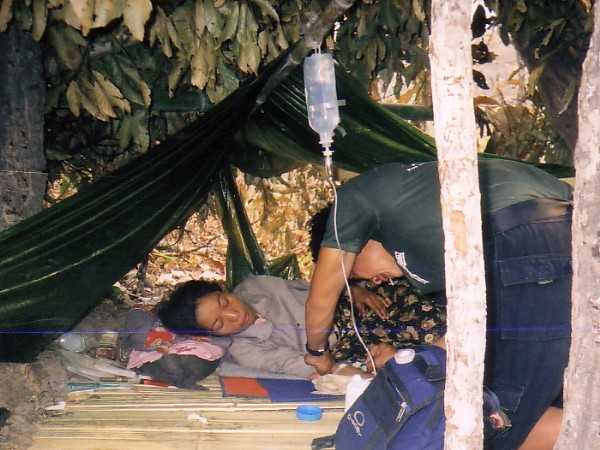 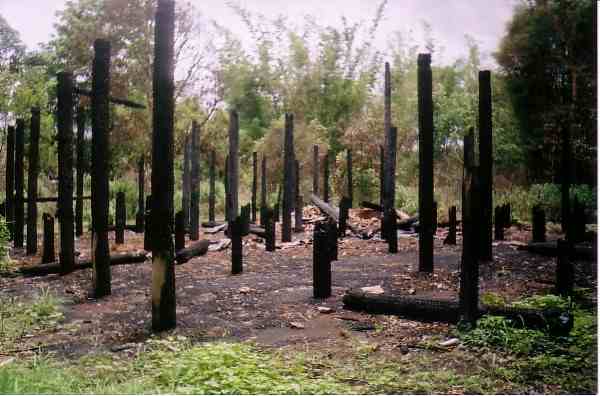 Building burned by the Burma Army
Summary:
This is the report from Shan Free Burma Rangers (FBR) team, on athree month relief mission to Mong Pan Township, Southern Shan Statefrom March 10, 2005 to May 20, 2005.
This report includes reports on the rape of an 8 year old girl and13 year old girl by Burma Army troops. It also includes recent attacksagainst civilians including; murder, torture, forced labor, forcedrelocation, destruction of villages and land confiscation.
Introduction:
A Shan FBR relief team provided relief to Internally DisplacedPersons and villagers in the Mong Pan, Southern Shan State from 10March to 20 May 2005 .
The team was able to provide medical care for over 2,000 people inhiding, document rapes, murders, forced labor, confiscation of propertyand forced relocation by the Burma Army. All of these human rightsviolations are ongoing.
The situation in Southern Shan State has deteriorated, with atotal of 20,000 people displaced in the Mong Pan area. In this area theBurma Army continues its brutal suppression of the Shan and otherethnic peoples. The report bellows gives detailed accounts of thesuffering of the people as well as a general update of the situation.
Report Outline-  (Where marked with an asterisk *, not allinformation is included.
However, the information is all on record and available forreference.)
I.     Human Rights Violations
II.    Humanitarian Relief Mission
III. *Location of IDPs
IV.  Activities of SPDC (Burma Army) troops.
V.    Interviews
VI.   Distribution of relief supplies
VII.  The Health and Education
VIII. Conclusion
*Team members.
*Team logbook.
*Attachments.
I.                 *Videotapes and pictures.
II.                 *Film
III.               *List of used medicine
IV.              *Financial report
V.                 *Proposal for future trips.
I. Human Right Violations by the Burma Army. Rape of an 8year old and 13 year old girl, murder, torture, forced labor, forcedrelocation, destruction of villages and land confiscation:
Rape of 8 year old girl:
2 May 2005, at midnight, the relief team arrived at XX  XXvillage, Ho Mong Township. They went to the house of the rape victim,Mo Kham, age 8, daughter of XXXXXX XX (age 40) and XX X age 34.
On 18 October 2004, the girl was raped by three soldiers fromBurma Army Infantry Battaion IB 132, who were stationed at TelephoneHill near Ho Mong. Burma Army IB 132 was based in Mawk Mai and hasmoved to Ho Mong as scheduled.
At around 10:40 a.m. neighbors noticed three soldiers came downfrom Telephone Hill and went in the direction of the victim’s house.While their parents were away working, Mo Kham was at home with heryounger brother. In the evening when the parents returned, they foundtheir daughter crying, with fresh blood staining the floor of the housein front of the family altar. Only then did Mo Kham and her brothertell their parents that she was raped by a Burmese soldier in her ownhome. After three days they went to treat Mo Kham at Ho Mong Hospital.Here the local Burma Army backed militia tried to bribe her parentswith 5,000 Kyats.
Rape of 13 year old girl:
29 May 2005, at 3:10 p.m., the team went to the house ofNang Xx, age 13, another rape victim in Wan Xx x.
The rape occurred during a Poy Sang Long (Novice ordinationceremony) in Ho Mong. The rape took place on 5 March 2005 at 10:00a.m.. While helping with the elders in the ceremony, the victim went torelieve herself under the cover of thick bushes near the fairground.
The rapist was a soldier from Burma Army IB 99, stationed in HoMong. The victim kept screaming as she was dragged in the bushes, helddown and raped. The rapist gave 1,000 kyats in an attempt to pacifyher, but she kept screaming and struggling, until several villagersattending the ceremony heard her. The villagers came running andvillager Mu xx chased away the rapist, who ran away to hide in hisgarrison.
(Remark: The FBR team has since evacuated the two rape victims andtheir families to safety)
Murder of villager, child wounded:
17 March 2005; at 11:15 a.m., the team arrived at Wan MaiKhao Larm to find burnt houses and wounded villagers. On 5 February2005, a 42 man Burma Army patrol from IB 287 lead by Major Kyi Myintcame through the camouflage of the deep jungle. They deployed on a hillto west of the village and fired with 60mm mortars and 40mm grenadelaunchers into the village, killing one elderly man and wounding oneelderly woman and one child. The casualties were;
Killed. 1. Mae Htao Yuo (Grandma Yuo), age 75.
Wounded.  1. Mae Htao Mya, age 70, wounded on her left chest byshrapnel.
2. Nang Shui, age 8, hit by shrapnel on her arm and legs.
Houses burnt-  1.Nang Mart’s house was burnt along with her 24bushels of paddy (rice).
2.Mae Htao Mya’s house, burnt with 48 bushels of paddy (rice).

This five man Shan FBR team conducted relief operations andinformation gathering to IDPs and villagers in Mong Pan Township.
Thank you to the SSA who made this mission possible and for all ofyou who have helped us,
Shan FBR team