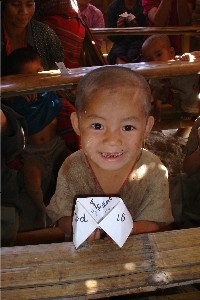 The Good Life Club Tour began on 8 January and was completed on 26 January 2005. The team visited 10 villages in Luthaw Township of Muthraw District, Karen State. We went to reach out to people of all faiths and were able to share together with Karen Christians (Protestant & Catholic), Buddhists, and Animists. The report includes the following information from each village as well as my own impressions: number of households, number of Christian households, number of churches and school data. School fee information is noted as an indicator of the local economy.

To better understand the priorities in each village, the headman (when available) was asked what he considered to be the 3 greatest needs of his village. In almost every case education and healthcare are the top needs. This reflects two very important concerns about the situation of villagers in rural Karen State.

The first priority, education, is of utmost importance and the challenges of meeting the educational needs in these rural areas are tremendous. The village leaders realize the great disparity of their educational progress in comparison to their neighboring countries. However there is a constant reminder of the ability of the Karen teachers to do so much with so little. For example, their supplies are meager and inadequate, yet they teach several subjects to a classroom of students with dedication and enthusiasm. The students demonstrate a great desire to learn, and hope for a better future for themselves and their families. In each village, approximately half of the students are able to pay the fees, which are approximately 50  90 Baht ($1-2.50) per student per year.

The second priority for the villagers as well as deep concern is healthcare. As a mother from the West, traveling with two small children, we were fully equipped with medicines for every ailment I could imagine having to treat, as I knew there would be no medicine available. But the reality of living with families, with children the same age as my own, for whom medicine and medical care was unavailable seems unfathomable, especially considering that the accessibility problem is primarily political. While the political problems of borders and government-controlled areas go on and on, these families are caught in an abyss.

It is an outrage they are denied basic human rights and services that are easily obtained in most neighboring countries. Everyday care items are unavailable such as acetaminophen, antibiotics, ointments and creams, Band-aids, vitamins, and cold remedies. Unobtainable treatments for life-threatening illnesses such as malaria, acute respiratory illness, and dysentery result in significant morbidity and heartbreaking mortality.

One of the most important healthcare concerns is malaria prevention. Malaria prophylaxis is very difficult to get and Mosquito Nets sell for the cost of attending one year of school in the village.

The area where our team traveled was considered one of the most stable and safe yet on two occasions we received word of Burma Army activity nearby and on one route were able to actually see a Burma Army post across the valley. This only adds to the amazement I have of the villagers to live steadfastly in the midst of looming malevolence, as well as the frustration for the lack of assistance given them to improve their situation. When the team members who had just come from an IDP mission in a different brigade gave their report, we could see new life in the people as they gained a greater understanding of the situation of their own people and saw the efforts of the relief teams to meet the needs of their brothers and sisters in crisis. The creative and industrious spirit of these people deserve to be put on the same level as their neighbors in being self sufficient and self determined in the basic rights of security, education and healthcare.

In terms of our program, the premise of the Good Life Club (GLC) comes from Jesus words in the Bible (John 10:10) The thief does not come except to steal, and to kill, and to destroy. I have come that they may have life, and that they may have it more abundantly.

Abundantly is a very generous word and as I believe that Jesus fulfills his promises, then all who call on Him for this abundant life will receive it, regardless of their situation. From this I gave the childrens program the name: the Good Life Club. As a team, we visited with children and adults and shared about Abundant Life: Body & Soul in two sessions, one in the morning and the other in the afternoon.

In the morning our team sang songs in Karen, Burmese and English followed by a Bible lesson about the life of Ruth using a flannel graph story (a copy of which was left at each village) emphasizing, choices, thankfulness, and being part of the family of God. We finished this session by making an origami paper toy for practicing English spelling and Bible verses in Karen language.  In the afternoon the team again sang songs to open the healthcare session. They then used puppet shows to teach on basic healthcare: village sanitation (latrines and burning rubbish), personal hygiene (toothbrushes, combs, fingernail clippers, washing hands & body, etc. In each case the teaching included examples of using sustainable resources, e.g. stick wrapped with cloth for a toothbrush etc.

We closed the afternoon session by playing games, jump rope and Frisbee (both of which were left in the villages). In the evening we used the computer and solar charged batteries to show Fear & Hope and give a report on current FBR relief missions. The villagers really appreciated hearing about the situation of their brothers and sisters in conflict areas and were proud of the Karen men and women on the relief teams who were assisting them. The movies were the Jesus Film in Karen language, and when we had adequate power, The Jungle Book cartoon.

Next year we will again follow the format of Abundant Life: Body & Soul and teach Bible in the morning and healthcare in the afternoon followed by movies at night. The team gave suggestions for improvement that are listed at the end of the trip report below.

Village 1: 2  8 January
IDP weaving project: This project provides thread and small income to women in the village who are interested. Promoting weaving and encouraging a way to help their brothers and sisters who are displaced.
Thread cost: 250 Bt per Blanket
Income: 100 Bt per blanket
Transportation costs: Approximately 50 Bt per blanket
Total cost per blanket: 400 Bt ( approximately $ 10.00)
24 women have committed to weaving blankets and these will be sent with the teams to IDPs on the Karen/Karenni border.

Village 4:  12-13 January
14 houses
Church (10 Christian houses)
School 1st 2nd Standard. 12 students
Teacher: Thramu H. H. S.: She lived in XXXX which came under attack by the Burma Army in the early 1990s. Her younger brother and her mother were arrested by the Burma Army and she fled. Later one of her brothers was killed by the BA. Her mother and other members of her family were released and are now in a refugee camp in Thailand. She has been a teacher here for the past 5 years. Supported by Pastor Robert
Needs: 1) School supplies
2) Increase grade level in school
3) Water pipe for latrine
Notes: This village received 11 of its current families from a Burma Army attack in 1992. During that attack, 4 children were left in the village. A bullet grazed one girls eyebrow but no further injury occurred. The parents returned to find their children and all relocated to a 2nd village, which was also attacked, before moving to XXXX. In 2000 the Burma Army came to XXXXr and shot at the village and wounded one village woman.
On the morning that we were preparing to leave, we were advised to pack quickly and exit 3 hours before our scheduled departure due to a radio message that the situation was not good for us to be in the village. After walking on the trail, one hour outside of the village, we were told that the message was a mistake and that we had been in no danger at XXXXX I was thankful that the dangerous situation was not true, but reminded that this type of radio message is always possible, and even in this stable area we must be aware of Burma Army movements and activity. There are three Burma Army posts all within 2.5 hours of the village.

Village 6: 18-19 January
Headman: Saw P.M.
18 households
1 Christian family
School 1st  2nd Std. 20 students Teacher: Thramu G.H. (school fee: 50B/year+1 tin ofrice/family)
Needs: 1) School Supplies
2) Student uniforms
3) Teacher salary
(supporting church, XXXX, may be terminating support)
Notes: 4 years ago the Burma Army burned this village, killed all the animals, and destroyed the rice supplies (including 3 hillsides of rice cultivation). One lady, 80-90 years old, was shot to death. The villagers hid one month then returned to their village to rebuild.
Teacher (28yrs) has an orthopedic problem with her back and leg. She is bent over with a bump on her back and her leg moves at an odd angle. I offered support for investigating her situation if she is interested and takes the initiative to travel to Dae Pu No for an assessment. Following the assessment we can take further steps if there is a possibility of treatment, based on the Dr.’s advice.

Village 7: 20-21 January
43 households (2 sections)
2 Churches RC (16 houses+Priest) Baptist (21Houses+Elder)
School 1st  2nd Std. 16 students Teacher: Thramu K.L. (school fees: 100B+1 tin of rice/year)
Needs: 1) Health: Malaria, ARI, Diarrhea
2) Education: school fees/teacher salary
3) Raise the school level from 2nd to 4th Standard. Currently the teacher receives 2,000 B from XXXX church.
Notes: In 1998 Burma Army IB#77 burned all the houses in the village, all the paddy rice, and took all the animals. They came again in 1999 but didnt enter the village.  The teacher is raising her sisters children (7yrs & 9yrs) because her brother in law (villager) was shot and killed by Burma Army 3 years ago in his village (2 day walk from XXXX). Sister has moved to a refugee camp.
One village elder asked for medical help for his brother (in another village) who has a serious UTI. The brothers wife is animist and prohibits him from going to the clinic or using anything other than traditional medicine. I told the elder to send word to his brother that I would leave some financial help for him at Dae Bu No clinic if he could go there as they can best treat his situation. We prayed for him and his wife and family. I gave Uncle F. 600 B as medical charity fund for this man (also can be used for others per U. F.s discretion).
Send: tambourine

Village 9: 24-25 January
23 housesholds
9 Christian houses (RC5, Baptist 4)
School 1st  2nd Std. 20 students
Needs: 1) Rice supplies not plentiful (Rats have infested the fields this past season
2) Health: ARI, Fever
3) Raise the school level and add one teacher. Current teacher support comes from XXXXX Church.
Notes: This is the only village I also went to last year. In one year there has been significant development as the number of students has grown from 10 boys to 20 boys and girls, and the number of Christian houses has grown from 4 to 9 houses. The headman was also very keen on the healthcare presentation and sought advice on how to build a latrine for his village.
Follow up on Saw K. H. whose teeth and jaw need work. Tawah indicated that he could be helped (not as difficult as thought)