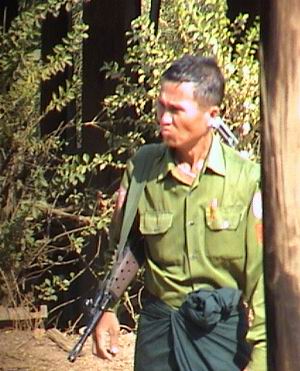 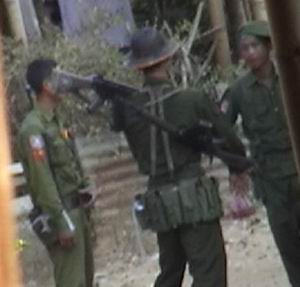 These are soldiers of IB 73. This battalion is involved in forced labor, portering and other human rights abuses against Karen villagers in Tantabin (Thandaung), Township, Toungoo District, Karen State, Burma. On 7 and 8 February 2005, troops of IB 73 under the command of Htun Za Oo at their lower camp vicinity Sha See Bo, Tantabin, forced 27 women and 55 men to help build their new camp. This camp is new as of 2004 and is being built with forced labor from surrounding villages. The closest village is the Karen village of Sha See Bo which has a population of 420 families and 2,411 people. On 8 February 2005, IB 60 based at They Aye Hta camp on the Toungoo-Mawchi road forced four villagers (Saw Xx and SawXx, Saw Xx and Naw (woman) Xx to work at their camp. Earlier, IB 264 also forced villagers to clear the road while on 5 February, LIB 439 forced two villagers to guide them as human mine sweepers on the Toungoo-Mawchi road. 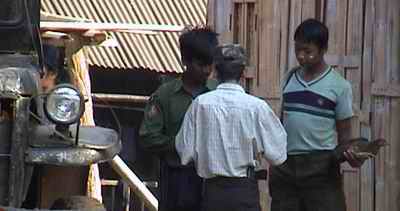 Burma Army soldiers of IB73 with a chicken they haven stolen from villagers.

Pictured are two Burma Army soldiers and an officer (in plain clothes). The chicken is in the hand of the soldier on the right, the man in the middle in plain clothes is a Burma Army Lieutenant. Picture:1 February 2005, Tantabin (Thandaung) Township, Toungoo District, Northern Karen State, Burma. Burma Army troops from IB73 control the road between Kaw They Der (Yee Tho Gyi) and Busakee. This road is a southern extension of the Toungoo-Mawchi road. These soldiers have forced villagers to carry loads for them, clear the road (resulting in one 15-year-old boy losing his leg to a landmine), conduct forced labor and have stolen villagers property. 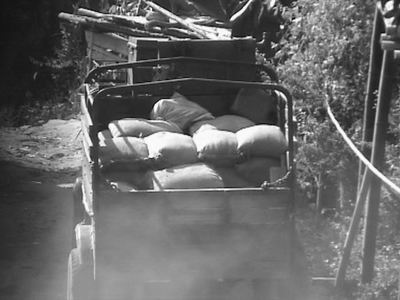 This picture is of the Burma Army sending supplies to its camps on the Kaw They Der (Yee Tho Gyi)-Busakee road. This road is an extension of the Toungoo-Mawchi road and was built using forced labor. The trucks used by the Burma Army to supply its camps are commandeered from local civilains who are forced to transport the Burma Army loads. Picture: 2 February 2005, Tantabin (Thandaung) Township, Toungoo District, Northern Karen State, Burma. 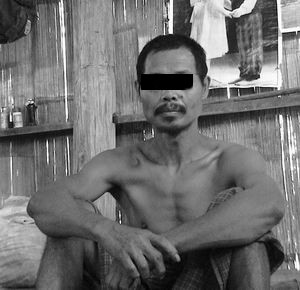 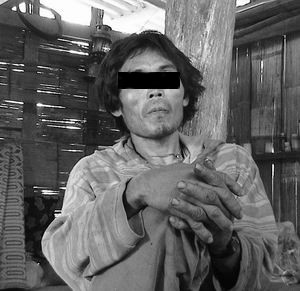 These Karenni IDPs, Saw Xx, 38yrs and Saw Xx, 40 yrs, were beaten by Burma Army soldiers of LIB 428 on 5 February 2005. These men were in the vicinity of Ka Waw Soe which is an IDP village in Southern Karenni State. The IDPs were interrogated by the soldiers, and then beaten in the legs and upper body with the soldiers’ weapons (an M79 was used to beat the men), and released. Before leaving, the Burma Army patrol stole four chickens, biscuits and one camera. There were two KNSO (Karenni group working for SPDC) guides that led the Burma Army to this place. 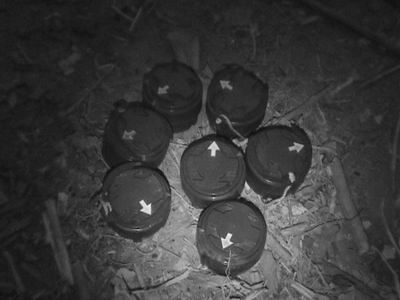 These landmines were discovered on a trail used by IDPs in Southern Karenni State. They were placed by the Burma Army in order to terrorize Karenni IDPs and block their return to their home areas. These mines are anti-personnel mines and are copies of the US M-14 anti-personnel mine. They are the same size as the US made M-14 landmine and are now being used extensively by the Burma Army. An estimated 1,000 landmines have been placed by the SPDC and KNSO in the area South of Mawchi to the Karen border.