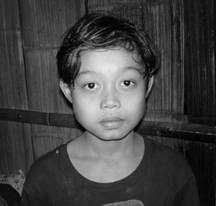 13 year old boy and 28 others forced to clear road for the Burma Army.
A 15-year-old boy from this group lost his leg while clearing this road.

This 13-year-old Karen boy from Klay Soe Kee was forced to clear the road from Kaw They Der (Yee Tho Gyi), to Naw Soe and on south to See Kay Der along with 28 villagers for the Burma Army during the month of December 2004, starting on 17 December 2004. He and the other villagers were forced to do this work by Burma Army battalion LIB 439 column #1, commanded by Aung Tin Win.

While the villagers were clearing the road, one boy, Saw Tha Po Dee age 15, stepped on a landmine and lost his lower leg and foot. Naw Soe and See Kay Der Army camps are located south of Kaw They Der on the road to Busakee, in (Thandaung), Toungoo District, Northern Karen State, Burma.  The forced road clearing by villagers is continuing now. 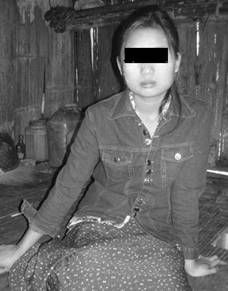 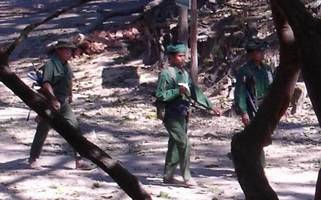 Burma Army troops guarding porters as they walk through Kler Lah (Baw Gale Gyi), Toungoo District, Karen State, Burma. January 21, 2005.  These troops are guarding porters that they have forced to carry loads.  Forced portering continues and has now intensified as the Burma Army is re-supplying its camps along the Toungoo-Mawchi road and Toungoo-Kler Lah-Busakee road.