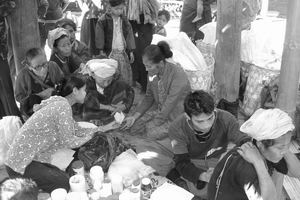 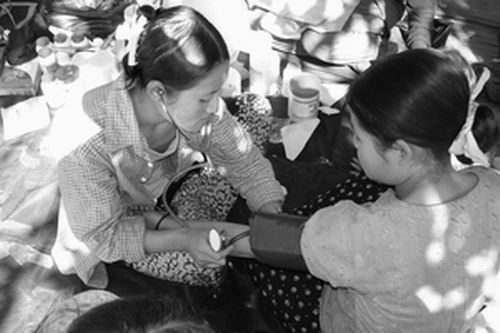 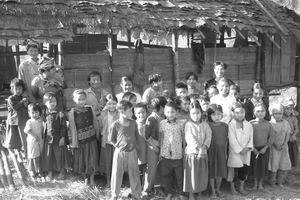 These Karenni children are attending a school in their hiding place in Toungoo District, Northern Karen State. They were forced to flee from Southern Karenni State into Karen State after the Burma Army attacked their village in 2004. These are only some of the over 2,000 Karenni IDPs who have fled into Northern and Northwestern Karen State, Burma, following Burma Army attacks. Picture taken by a FBR relief team on January 12th, 2005. 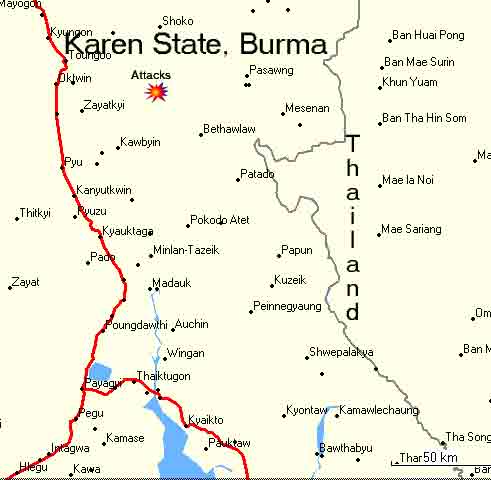 Message from a FBR relief team in the field:

The Burma Army attacks and loots a village, captures and reportedly murders (bodies not yet found) 2 villagers, and continues its practice of forced labor and repression of Karen people in Toungoo District, Karen State, Burma. January 14, 2005.

There are over 20,000 IDPs total in Toungoo District Northern Karen State. Almost every village has been attacked at one time or another and even those able to return to their villages are forced to flee again and again.

There are now 400 new IDPs as 70 families flee an ongoing operation by the Burma Army. There are 400 new IDPs hiding in the Saw Wah Der area of Tantabin Township, Toungoo District, Northern Karen State. This is southeast of the junction of the Toungoo-Mawchi and the Kler Lah-Busakee roads. Vicinity N 18 53  E 096  50. On the 26th of December, 2004 Burma Army Battalions IB 73 and LIB 439 attacked Saw Wah Der village, looting the village and capturing two villagers. The other villagers fled into the jungle. Two villagers captured were two men: Saw Ta Tam 38 yrs, with a wife and six children and Saw Tu Kru, 40 yrs. These two men were taken to the Burma Army camp at Kaw They Der. They have been reportedly executed but there is still no confirmation as of this date. The rest of the 400 villagers are in hiding now as the Burma Army Battalion IB 73 is aggressively patrolling this area. The villagers of Saw Wah Der as well as other IDPs from Yaw Tha Bei and Wah Baw Kee who had fled earlier are all in, scattered in small groups in the jungle.Rice is running out and weakened by exposure, many are sick with malaria, respiratory infections, diarrhea and typhoid.

On January 1, 2005, the Burma Army began construction of a new road from Thandaung to Leit Tho. This new road is part of a 5-road project the Burma Army is conducting in Eastern Toungoo District, Karen State.

1)     Thandaung-Leit Tho road. Construction began on 1/1/05, and once complete will provide a more direct route from Thandaung to Leit Tho and on to Loikaw, Karenni State. Thandaung is a major Burma Army training area for artillery, mortar and counter guerilla training. The sound of heavy artillery and mortar fire of practicing Burma Army units can be heard as far away as the Karenni border everyday.

2)     Toungoo-Mawchi road. Construction is ongoing. All weather gravel road from Toungoo to vicinity Tha Aye Hta-Ha Toh Per- (N 18 54 E 96  50). Here it is a dry season only road due to wash outs and deep rivers-no permanent bridges beyond Tha Aye Hta. ( The last bridge is at Tha Aye Hta and is a iron bridge from the British era). Forced labor and bulldozers are used on this road as the SPDC attempts to complete an all weather road to Mawchi in Karenni State. As of this report there are 13 Burma Army camps along this road between Toungoo and the Karenni Border. The newest camp, located at Ko Day, west of Yethogale, vicinity  N 18  54  E 96 50 was constructed in April, 2004. The Burma Army patrols this road and conducts regular operations against villages located near the road.

3)     Toungoo-Kler Lah-Busakee road. This road is now under construction using forced labor and one bulldozer. The bulldozer is now at Kaw Tha Der village. The road is a dry season only road that extends south to within 15 kilometers from Papun District, Karen State. During the dry season the Burma Army forces privately owned vehicles to carry supplies for the Burma outposts on this road. There is no remuneration for this and the vehicle owners must pay for all fuel and repairs. There are six Burma Army camps on this road.

4)      The Ma La Daw, (In northern Mon township, just south of Toungoo district border) to Busakee, Toungoo district road. This road has progressed to the Play Loh river south of Tha Pyay Nyunt, but is still 20 kilometers short (southwest) of Busakee. There are so far, two Burma Army camps on this road.

5)      Pah Leh Wa to Klaw Me Der road. This is a spur road south off the Toungoo-Mawchi road. Construction continues on this dry season only road that penetrates into central Tanatbin Township, Toungoo District. There are two Burma Army camps on this road.

From December 16, 2004 through this date, January 14, 2005, every family in the Klay Soe Kee area (vicinity the junction of the Toungoo-Mawchi and Kler Lah-Busakee roads), must provide one person to work on the roads. Men and women are forced to work everyday with no pay, under the supervision of Burma Army battalion IB 73.

2) Two Burma Army Battalions shoot a villager in nearby Mon township and fire into a Christmas Celebration: