The following report summaries are from three ethnic teams who completed  Leadership and Relief Training and then went to serve their people in the war zones of Burma.
Thank you and God bless you. 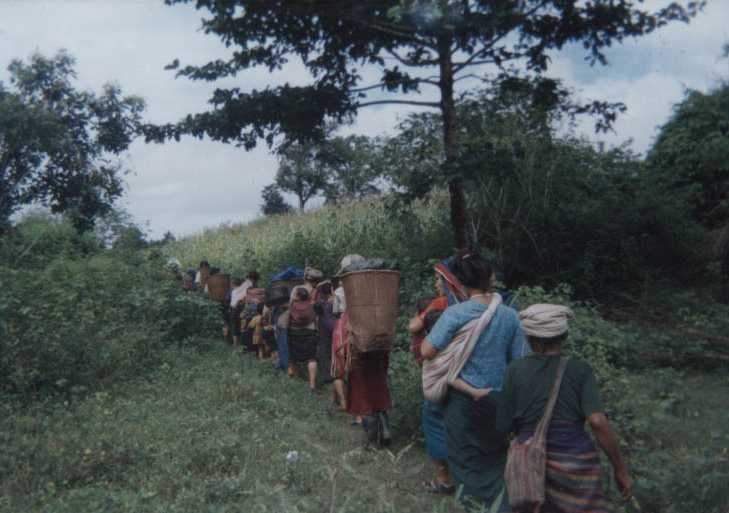 IDPs IDPs fleeing to the Thai-Burma border
From the beginning ofSeptember to 16, 2003 due to fighting  between KNLA(Karen National Liberation Army) troops and combined troops from SPDC(State Peace and Development Council or Burma Army) and DKBA(Democratic Karen Buddhist Army), about 152 people (children to adult)from 37 households became war victims and fled to the Thai-Burmaborder to take refuge.
They were from villages suchas Thi Wah Pu, Wa Klu Pu, Po Thwee Mu and Htee Ka Par, located in ThiWah Pu Village Tract in Ta Nay Chah Township of Pa-an District. As a result of the meetings between KNU (Karen National Union) leadersand Thai local authorities on 16/ 9/ 2003 and 18/9/2003, thesevillagers were settled at a Buddhist temple compound in Klen Mu Kyaukvillage in Tha Song Yan Township of Tak Province. Most of these warvictims were women (mothers) and children. Relief teams are now in thearea attacked to assist the IDPs who have not fled to the Thaiborder.
NORTHERN KAREN STATE-PAAN DISTRICT June-August 2003
A Free Burma Ranger team went on a reliefmission from June until August 2003. The members of the team are fromthe Paan District and they traveled in their home area to help thosewho have recently been attacked by the Burma Army and Democratic KarenBuddhist Army (DKBA) troops. 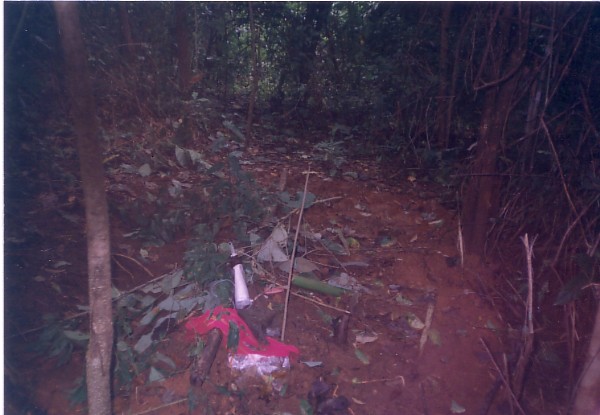 On August 6, 2003, a seventeen year old girl from Htee Kli Tha Village was raped and killed by DKBA soldier Moe Kyo. Her father was arrested and taken into custody, her family’s farm house was burned down and all their animals were killed. 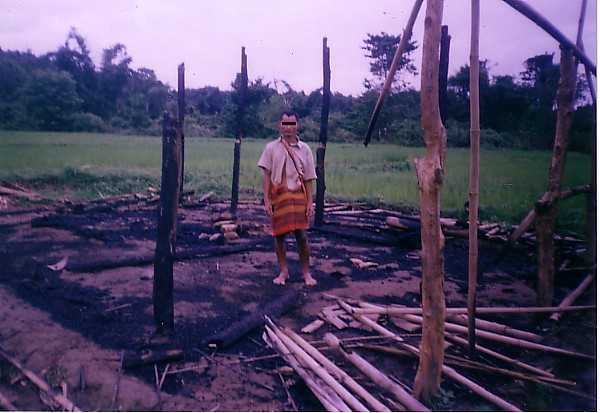 On June 10, 2003,  this Htee Th’blu Hta farm house was burned down by Burma Army and DKBA troops
In this area during the months of June, Julyand August 2003, combined Burma Army (LIB 703) and DKBA (555)troops burned down Si Pa Day Kii village, K’nen Lay Kaw Htit farmhouses, Hsi Pa Day Kee village and farm houses, Htee Th’Blu Htavillage and farm houses. The area has become a free-fire zone, withBurma Army(BA) and DKBA troops shooting anyone they see who is notstaying in areas they have designated. The BA has restrictedthe movement of villagers, cutting off access to the villagers’fields and thus thier livelihood. The combined BA and DKBA troopshave looted villagers belongings and forced the villagers’ to work asslaves for them. The report names over 20 villagers who were torturedor beaten by the BA and DKBA troops and Naw Mu Kut, who was raped andkilled by a DKBA soldier.
NORTHERN KAREN STATE- MUTHRAW DISTRICT  August 15-30, 2003
The Mutraw FBR team conducteda mission and visited villagers, particularly in Lu Thaw Township andborder areas of Mutraw District. It was found that the villagersliving in the areas here are facing many difficulties. The worstsituation for them are the brutal military offensives practiced by theBurma Army. When we met with them we talked about their sufferings andthen we encouraged and prayed for their sufferings, lives, andsurvival.
The troops of KnSO (KarenniSolidarity Organization), a group that surrendered to the SPDCrecently, joined with SPDC troops and launched a offensive along theborder area of Mu Traw District, Karen State and thesouthern Karenni State. They have also attacked the hiding placesof IDPs, forcing some to flee to Muthraw district. The commandersz ofthe KnSO are Bo Tet Net, Ker Per Wah and Kyaw Nee Doh. They combinedwith SPDC troops, stationed in the Maw Kyi area. The IDPs in theborder area are facing difficulties such as food shortage, clothes,and diseases. With fear and in a difficult situation, all they can dois work to survive.
At all of  the IDPlocations we visited, we distributed Bibles, Hymnbooks and providedmedical treatment. We also provided them with health knowledge inorder for them to be aware of how to care for their health and preventdiseases. The team treated a total of 663patients. The most common things patients were suffering from weremalaria, anemia, and acute respiratory infections.
It was found that all of theIDPs in the area are living in a constant fear and move from place toplace, desiring to be free from the Burma Army’s oppressions andmovements. The main necessities for them are food, clothes, healthcare, and good security. Some villagers are Christians and some areAnimists. In education status, it was found that some areas thevillagers themselves have tried their best and set up primary schoolsas the situation permits in their locations.

In order to do better for further missions we wish to the leaders will correct and make suggestions to us where it is necessary.