Update on Burma Army Attacks in Toungoo and Nyaunglebin Districts

There are still a minimum of 2,000 villagers from 16 villages who are hiding in the jungle after fleeing recent Burma Army attacks in Toungoo District, Northern Karen State. These IDPs have not been able to return home due to the continual patrolling of the area by Burma Army forces from new army camps they have built. The Burma Army also loots and burns all rice supplies and belongings that they find where villagers have hid them in the jungle. Many of the people are running out of food and have chosen to flee to refugee camps. While around 400 have made it to the border, there are still hundreds who are stuck in Toungoo District, Muthraw District, and Karenni State because patrols along roads and trails have blocked them from leaving the area.

In Nyaunglebin District, Western Karen State, another 3,000 villagers are in a similar situation. These villagers were recently attacked and have been unable to return home because of Burma Army Presence. Burma Army forces continue to patrol and search for IDP hide sites. The Burma Army is also now re-supplying all of their camps and operational bases in this area.

There are also reports of another 2,000 or more IDPs from recent attacks in Karenni State, which would bring the total number of new IDPs to over 7,000, however these reports and numbers have not yet been confirmed.

Relief teams in the area are doing their best to help the IDPs at this time. Food and medicine are the basic needs but more than that is the need for security. 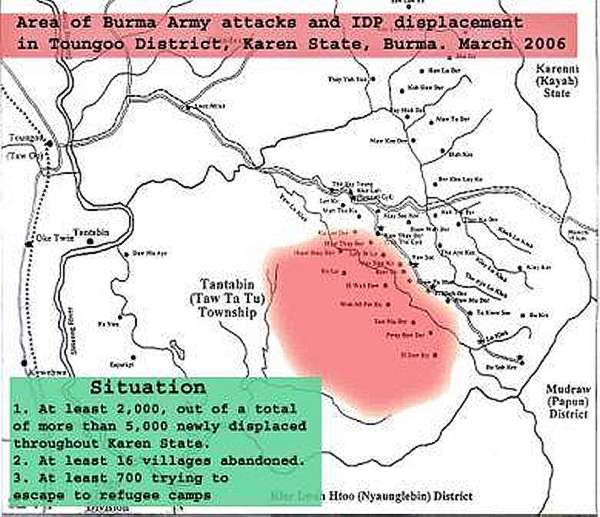 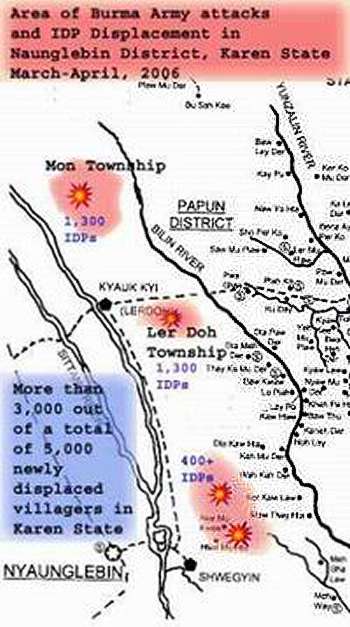