*Note: The following reports are from teams who were trained earlier in 2003 in a Leadership and Relief Training and then went to serve their people in the war zones of Burma.These are summaries of the reports submitted by these teams. If you would like more information or the complete reports, please contact us at info@freeburmarangers.org.  Thank you and God bless you.

The Burma Army toops have been building roads in this District and have essentially cut off any easy travel by the villagers to and from their own fields or to other villages. Many reports of villagers being hurt or killed by Burma Army land mines or being shot at by the Burma Army were collected by the team. Forced portering, confiscation of villagers’ personal property and other human rights violations are a common occurence in the area the team visited.

The team received many requests for support of children who would like to attend school. At present, many children are not able to study because of Burma army activities and the resultant food shortages. In the 14 villages the team visited, there were only 4 schools operating.

The most recent attack on this area by the dictators’ Burma Army troops was on July 22nd, 2003. Troops from the Burma Army (IB (60)) shot and killed a 57 year old man, took his rice supply and money and continued thier patrol.

New information about narcotics trafficking by the UWSA and the activities of a Lahu relief team are included in this report.  If you have any questions about this report, please reply to freeburmarangers@pobox.com.

The  Lahu relief team conducted a mnedical and general relief mission as well tas the support of an orphanage and the  documentation of the human rights situation along the Thai – Burma border. Since this area is also the scene of narcotics tafficking the relief team submitted the information below. On 16 August 2003, 26 soldiers of the UWSA (United Wa State Army) and Chinese- Kokang brought over 2 million methamphetamine pills and crossed the Thai-Burma border vicinity Nang Ko Mun, Nawng Ok. This shipment is owned by Law Yi, who is Chinese – Kokang. There are over 100 million amphetamine tablets stored in a cave along the Thai – Burma border. From this location the amphetamines are sent into Thailand.

Four million of these tablets have already been packaged and have been sent across the border vicinity Ho par ho yaw, Loi Lang, Mae Ai and Mae Sui areas (Chiang Rai Province) of Thailand. These movements occured between 20 August until 31 August 2003.
Note; This information sent to us by one of our Lahu relief team members who went to inside Burma on 2 July 2003.

SOUTH-CENTRAL KAREN STATE
June/July 2003 Relief Mission to Dooplaya District, Karen State, Burma
FROM THE DOOPLAYA FBR TEAM;’The Dooplaya FBR mission assisted the villagers and those who are in desperate need. The villagers ,particularly in Kya Aye Township, are facing constant military offensives by the SPDC’s (Burma Army) troops. Due to the continuous brutal oppression practiced by the SPDC troops these villagers fled and made shelters in the jungle.
In Dooplaya District there are 23,183 Internally Displaced People (IDPs). They are facing insufficient food, serious diseases, and also lack good security. These people are always trying to think where they will flee next if the Burma Army troops come again.
When the team arrived to the areas in Wal Raw Township, found the SPDC troops had committed the following human rights violations;(1) A woman was arrested by the BA troops when entering a village. She was called to the BA military camp and raped.(2) A villager was tortured severely by the BA troops.(3) A villager was arrested by the BA troops when entering village, and then forced to be a porter for them.

The FBR team arrived at the IDPs hiding places and held times of worship. After that we distributed Bibles, Hymnbooks and some clothes to the villagers as well as toys and gifts for the children. In most places we treated the patients for two days. We encouraged and prayed for them to be free from all forms of oppression practiced by BA troops. We prayed to God for blessings for them, and that one day they will be able to live in their own native villages.

At the time of our FBR team mission to Dooplaya District, at every place, the villagers are in desperate need. They particularly need medical attention. There were many patients not able to leave their beds. Some people even suffered severe diseases to the point of unconsciousness because they didn’t have sufficient medicine, and they had no proper food or shelter.
They are always facing a life on the run, fleeing and hiding from the severe offensives launched by the Burmese military troops. In order to lessen their hardships and suffering, we find that the missions like this should continue and increase in these areas. Moreover, those villages which have no schools should  have schools established, as well as medical training and vocational training such as agriculture and live-stock breeding.

During the mission, the organizations such as KWO (Karen Women’s Organization) and KYO (Karen Youth Organization) also joined with us. Altogether about 40 people participated in the mission. Because of this, we had a problem of food and security.’

A Karen Free Burma Rangers Relief team went to the Paan District of Karen State, Burma. They were able to serve and encourage the people there. In the areas they visited, there is increasing pressure on IDPs and villagers to have no contact with outsiders and follow all instructions given by the Burma Army and their proxy army, the Democratic Karen Buddhist Army (DKBA). The team provided medical care and distributed what supplies they could to the IDPs and villagers.

A taped interview with IDPs done by the FBR team can be summarized as follows. June 15, 2003; IDPs interviewed said that SPDC(Burma Army) and DKBA came in to XXXX village and beat villagers with guns. They also killed pigs, chickens, and ducks. They forced the villagers to carry loads fro them and forced them to go to their camp at Kaw Tho Kee and clean it up,. They stold the villagers’ possessions. Two troops from BA Battalion 703 Column 1 under Htun Htun Win, and #2 Htun Htun Naoung went to the village and beat the headman. They didn’t ask any questions, only beat him. They also kicked his pregnant wife. The SPDC and DKBA soldiers stole 4.6 million (approximately 800,000 Thai Baht or $20,000) worth of goods from the villagers and the village store. 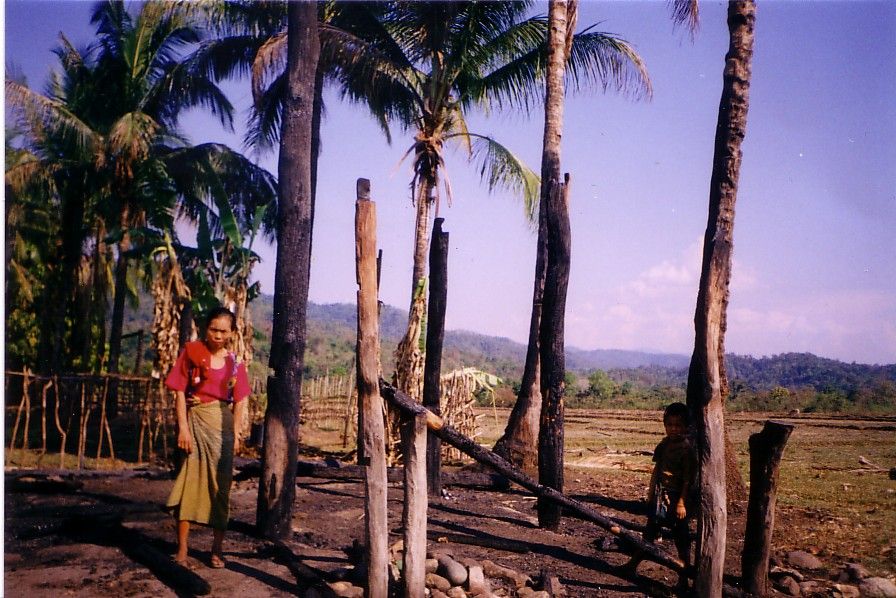 | Karen villager stands in the remains of her burned home.

This is the report of an ethnic Karen Paan Free Burma Ranger team on a relief mission to serve the Internally Displaced People (IDPs) in Paan District, Karen State, Burma from February 4 to April 5, 2003,. Their purpose was to uplift the IDPs and villagers and remind them they should have freedom and equality, and that they are not forgotten by the world.

The team conducted most of its work Na Bu township and Paing Kyong Township, eastern Karen State, west of the Dawna mountain range, opposite Tha Song Yang Township of Thailand.

The general situation the team reported was bleak and continuing to deteriorate. The Burma Army, reinforced by the Democratic Karen Buddhist Army (DKBA), a proxy army of the dictators, continue to force villagers to labor for the army and at least once a year attack villagers in the Dawna area. Sixteen interviews were conducted by this team with villagers in the area. The forced labor reported in interviews with IDPs indicated increased forced labor in road construction, with no food or pay given to the IDPs working on the roads. The Burma Army and DKBA kill and steal livestock from most villages they visit. At least 700,000 Kyat (17,500 Thai Baht or US$425), a large sum in Burma, worth of villagers’ possessions were stolen or destroyed by the Burma Army or DKBA troops. Ten farm houses were burned to the ground and many in this area have recently moved into hiding because of the constant persecution by the Burma Army and DKBA.

On February 21, 2003, a combined SPDC and DKBA force attacked the villagers at Ti Baw Plaw, burning down villagers’ field huts and cow fences. This attack disrupted the feeding of the cows and bulls during the difficult rainy season.

At 11am, March 7, 2003, a 35-year old Karen man was attacked by DKBA troops. He and a friend were visiting friends in a nearby village and the DKBa soldiers asked for money for alcohol from the two men. They gave them 300 kyats, and started to leave, when the troops beat the man in the head until he started bleeding.

Please pray for the Paan District, Karen State, and all of Burma. The IDPs need immediate and long-term help to ensure their security and give them any hope for the future. The Paan FBR team thanked those who helped give them security and assistance while on their trip.
If you would like the complete report, which includes 16 interviews with villagers and more photographs, please contact us at  info@freeburmarangers.com and include the title of this report and the email where you would like to receive the report.